The Foundation for the Study of Cycles

The Foundation for the Study of Cycles is a registered 501(c)(3) non-profit educational institution. Your contribution is tax-deductible to the extent permitted.

Login to online library and members only section.

Enter the email address you used to sign up and we will send you a link to reset your password.

The Foundation for the Study of Cycles is a nonprofit research and educational institution dedicated to the interdisciplinary study of recurring patterns in all areas of research. Your generous donation supports continued research for the betterment of our world.

Thank you for the registration and welcome the FSC!

The Foundation for the Study of Cycles is a registered 501(c)(3) non-profit educational institution. Your contribution is tax-deductible to the extent permitted.

BACK TO BLOG
PrevNext

The cycles found in solar wind speed had a bunch of periods around 3.0291 and 3.6065 minutes, which were found to be very stable cycles periods from one day to the next, but the amplitudes got stronger and weaker over a few days.

When the analysis was repeated after some years, quite different periods were found, but again stable over a few days. Clearly the periods must depend on some physical aspects of the sun and perhaps the solar system that change gradually but are very stable for days at a time. The cause is not at all obvious.

Such behavior can perhaps be understood because of the similarity between nucleus, electrons, and atom to sun, planets, and solar system.

The ACE satellite measures the solar wind speed (among other things) of particles traveling from the sun towards the earth. Located at the L1 libration point it is always around 1.5 million km in the direction of the sun and so can give about an hour warning of space weather changes. The solar wind speed is typically in the range of 300 to 700 km/s. 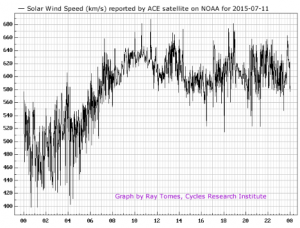 It can be seen that minute by minute there are substantial changes in solar wind speed. A spectral analysis of the solar wind speed shows a number of cycles significant at p=0.05 level as listed in this table:

The first two listed cycles in particular are extremely significant and would not occur even one time in a hundred million by chance alone. The Bartell’s test shows the significance of cycles as a probability. They did occur in two different days that I analyzed, with extremely similar periods.

The part of the spectrum near to these two cycles is shown because there are other significant cycles nearby: 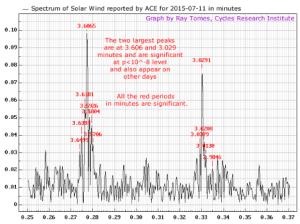 A graph of the autocorrelation of the minute-by-minute changes of the solar wind speed up to 200 minutes lag is shown: 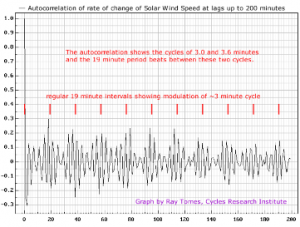 This shows how the change in solar wind speed compares to the corresponding change at lags of up to 200 minutes and it can be clearly seen that there is a cycle of 3 minutes or so, and also that there is a modulation of 19 minutes in the autocorrelation. The two dominant cycles periods will produce beats of 18.92 minutes just as we observe. Note that there are two actual cycles near to 19 minutes also.

The author has often found cycles of near 3 and 6 minutes in the solar system previously. Along with 80 and 160 minutes these periods are rather common. We may note that the inner planets are roughly spaced at 3 light minutes apart in distance from the Sun, and the outer planets at 80 light minutes apart.

In my previous post to CRI Blog, I reported on Kotovs method of analyzing planetary distances from the Sun gives spacings which are multiples or fractions of 0.376, 0.734, 5.01 and 10.06 AU. Light travels 1 AU in 8.317 minutes, so these distances can be converted to periods of an electromagnetic (or gravitational) standing wave of 3.13, 6.10, 41.7, and 83.7 minutes. In the solar wind speed as well as many cycles around 3 minutes or so there are a number at a little over 6 minutes.

Two periods of 3.17 and 6.34 minutes have also been found by the author in fluctuations in the rate of radioactive decay of Plutonium as measured by Biophysics laboratory at Russian Academy of Sciences in Pushchino. These periods are not perfectly steady but wander about by around 5%.

BACK TO BLOG
PrevNext